The Bravado Essential Embrace Nursing Bra is the most comfortable, supportive, yet lightweight bra that you will ever wear while pregnant or nursing. Its revolutionary patent pending Bravado Dynatex fabric combines premium cotton & luxurious microfiber all in one. 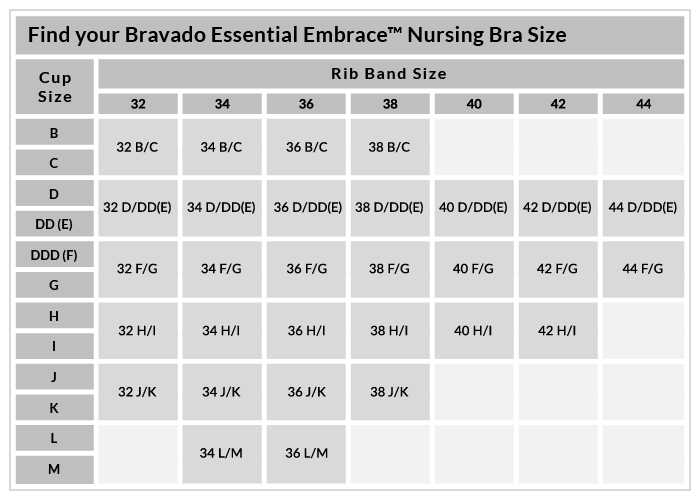 I like this bra, but it was difficult to know what size I am. I measure a 35F, and obviously they don't make band sizes as a 35. I tried on a bunch of non-nursing bras in stores and felt comfortable sizing down to the 34F-G, but the band on this bra is TIGHT so I exchanged it for 36E-F and this size fits great. I live in Bravado bras and nursing tanks when I'm nursing and this is another great product! It has more support than some of the S/M/L sized bras and is low-cut enough to wear with most shirts while still providing ample coverage.
Reviewed by C. Z. (Mahomet, IL), Nursing a 9 month old

I LOVE the support of this bra! This bra is one of my favorites I own. I am a 38 G and this bra supports wonderfully while being super comfortable. However, in my size, it does show when worn under most of my V shaped nursing shirts. If it was able to provide the same support and comfort with not showing, it would be the perfect nursing bra. So I do not wear this bra at most fancy events, but it is an amazing everyday bra or to wear with non-Vneck shirts.
Reviewed by C. S. (Maplewood, MN), Nursing

I'm currently a 38 K or L, depending on brand. I ordered this in 36 L/M and it is working well. Pre-pregnancy I was a 36 so I expect I'll probably wear this more once my rib cage area shrinks down a bit - but in the interim they also include a 4-hook extender! So I've been able to wear this some and it's really comfortable. Not quite as supportive as my usual bras but they have underwires. Pretty good support for a wireless bra.
Reviewed by R. G. (Durham, NC), 9 months pregnant

I LOVE this bra. Super comfortable. The fabric was very cool and free feeling while providing great support. Looks great under clothes too. I was a 36C before baby, 36D during pregnancy and fluctuate between a36D/E during breastfeeding. This bra (36D/E) is the perfect size for me during pregnancy and nursing. Will definitely be ordering it in black too. Wish they had this bra around for my first baby!
Reviewed by R. S. (Arlington, Tennessee), 7 month pregnant

A nice nursing bra overall, but not as wonderful as I had expected... I still prefer the Seamless Silk bra by Bravado - it's more flexible and forgiving. This bra doesn't seem to have much stretch to it, so there can be some rippling in the cups, and ironically (given the description/claims) is the only bra I have that accentuates back fat and creates rolls... I'm keeping it, but I won't buy another.
Reviewed by C. B. (Raleigh, NC), Nursing a 7 month old

Great bra for large busted women. Nice support for wearing out when you want to dress up. Band is a little tight for my size, but over time bras loosen up so I stuck with it. They give you a bra extender in the package too to get you through pregnancy so that the bra without the extender won't be too big once you have the baby.
Reviewed by A. W. (Martinsville, IN), 4 months pregnant, 5th baby

This bra offers good support for G cup breasts, but it does squash them a little as the material is supportive but the cups don't have enough structure. I've decided to keep this bra for every day wear, but it's not as nice as the Bravado Bliss. I believe the design of this bra would work better for smaller cup sizes.
Reviewed by D. M. (Henderson, NV), Nursing a 2 Month Old

I have a large chest and have always needed underwire to feel supported. This is the first no wire bra that has ever been supportive enough. It's a nursing bra that feels like a regular bra. Nursing in it is easy and comfortable. The cups aren't bulky when pulled down like some others can be.
Reviewed by M. H. (Woodbridge, VA), nursing a newborn
Read all 39 reviews

Bravado Designs is one of the most established and respected nursing bra designers in the world. It began 25 years ago with the vision of two moms who knew what it would take to make truly comfortable and stylish nursing bras. The Original Nursing Bra launched the company into and international success and continues to be a best-selling nursing bra today.

In keeping with their committment to support new moms, Bravado Designs has continued to innovate and add new nursing bras to their line. Their Body Silk Seamless Nursing Bra has been a hands-down favorite every day nursing bra of Figure 8 Moms. The Buttercup Nursing Bra is the perfect T-shirt Nursing Bra, combining clean styling with great function. If underwire support is what you crave the Belle Underwire Nursing Bra has been designed with care to suit your breastfeeding needs. The Ballet Nursing Bra will it's claspless pull-on styling is great for lounging and sleeping. The Clip and Pump Hands-Free Nursing Bra Accessory is Bravado Design's brilliant solution for pumping moms. It allows you to turn any Bravado Designs bra into a pump nursing bra.
Other Frequently Asked Questions | Search for help or products
Copyright © 2021 Figure 8 Moms All Rights Reserved.